The Time I Went to Soft Play (During School Holidays) 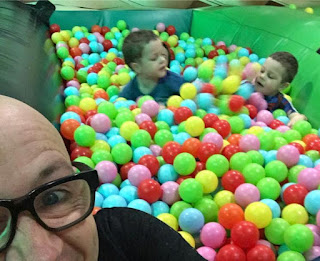 We went to the soft play last week. It was meant to be fun. It was more like the Dunkirk landings.

The day went south as we entered the car park. There was a massive queue outside. So we joined it. And stood in the rain. Just to get inside this spongy, bottomless pit of bastards.

My first instinct was to turn myself and the boys around, hoping they wouldn’t notice that we’d driven all the way to the soft play, parked at the soft play and were now waiting outside the soft play.

But it would’ve been easier to talk down a pair of rabid Doberman who’ve not eaten in two days and have spotted the postman’s arse through the letterbox.

‘Shall we go somewhere else boys?’

My withdrawal attempt wasn’t just optimistic. It was moronic and has since been filed under: ’Parenting Errors of Extreme Fuckwittery.’ (Other notable entries include: turning the TV off without prior warning and offering beverages from incorrectly coloured beakers.)

I scrapped my extraction plan. We had no choice but to forge ahead. I gripped my boys’ hands and went to the happy place in my mind.

*Breathe deeply, Sam. You’re not at the soft play right now. You’re lying on the white beach of a beautiful Caribbean island. You’re sipping a cocktail. The tide is lapping against your toes. Feel that sun beating onto your face. Mmmm, lovely. And look! A butterfly! It’s beautiful! Hang on, that’s not a butterfly. That’s a wasp. Looks angry too. Proper pissed off. It’s coming at your face! FUCKING LEG IT!*

An unbroken scream from inside jolted me back to reality. The scream appeared to be a group effort - as one reached the end of their breath another kid took up the mantle - and it pierced through the air like a rusty drill.

We paid our £14.50 entry fee (a bargain to visit the bowels of Hell) and shuffled forwards. I nervously surveyed the carnage that awaited us. It looked like Willy Wonka’s Chocolate Factory if the Oompa Loompa’s had rioted over poor working conditions.

Loads of the other kids seemed older. Much older. Some of them looked positively ANCIENT compared to my four year old twins. I stared in disbelief at one older kid with an iPhone and facial hair before realising it was someone’s dad.

A ten year-old sprinted past and punched his friend in the back of the head, spraying fizzy drink across the floor. A six year old came racing out of nowhere and slipped on the newly-formed carbonated river, crying for his mum as he skidded headfirst into a bunch of people.

Everywhere I looked there were toddlers tripping over, children diving onto each other and kids spilling endlessly out of crawl tunnels like the Viet Cong with Fruit Shoots.

We pushed our way over to the slide that was now resembling an aircraft evacuation device. Bodies flying everywhere. Adults losing their grip on both offspring and reality.
Some random kid asked me to pick him up and in the melee I coldly replied, ‘I’m sorry but no…’ as if he was trying to sell me a timeshare holiday.

We fought our way to the top of a slide when one of mine decided that he didn’t want to go down after all. I grabbed him and his brother and squawked, ‘NONE OF US DO, MATE’ as we toppled downwards with less grace than a family of hippos who bought each other roller boots for Christmas.

At the bottom we twatted straight into a backlog of kids who had decided that a busy slide was the perfect place to chill out and shoot the breeze.

Then my boys started fighting amongst themselves.

I sternly asked if they wanted to go home, realising that I had literally zero control over the situation and would have to go along with whatever they said.

Without giving them time to consider the consequences of their answer we were racing for our freedom. After a quick (and embarrassing) return to get their shoes, we were back in the car.

‘That was fun,’ said absolutely no-one, as we drove home in silence. #makingmemories