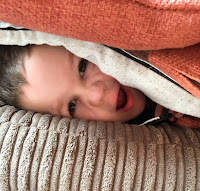 MONDAY
Did a stand up wee for the first time. Felt very grown up. Shame it was on the bookcase.

TUESDAY
Must stop giggling when I’m up to no good. It alerts the authorities.

WEDNESDAY
Managed to bolt out the front door and leg it halfway down the street completely bollocko. Felt like the whole world was chasing me. The big people shouted my name as the cool night air caressed my jiggling junk. Never felt so alive.

THURSDAY
Daddy put my shoes on the wrong feet and took me to nursery. What chance have I got riddled with the genes of this fuckwit?

FRIDAY
Invented a new game in the garden that combined the traditional elements of Association Football alongside the mindless and unforgiving violence of an inner city riot. Mummy refused to play with me because I was ‘kicking the fence’ even though, if she’d listened properly, she’d know that was clearly within the rules.

SATURDAY
Ran away while daddy was wiping my arse. The miserable git didn’t offer a smile even though it was clearly the most hilarious thing in the history of things. He just got stressed and started chasing me with loads of loo paper in both hands like some toilet-based cheerleader, imploring me not to sit down because my weeping bumhole would ruin the carpet. If anything, he only planted the idea in my head to rub my rusty hoop on as much of the floor as I could so it’s entirely his fault that our landing now looks like a Jackson Pollock.

SUNDAY
It’s been made aware to me that a very small selection of adults would prefer these diaries without the swearing. They believe that it’s not appropriate for a child of my age to use the language that I do. Even though I’m fictional. Knob off, bellwipes.