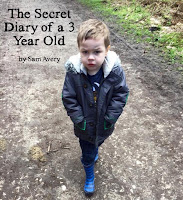 MONDAY
Had a dream that I ruled the world. Everyone did exactly what I said and I got away with absolute murder. It was just like when the grandparents look after me.

TUESDAY
When Mummy dresses me I look awesome but when Daddy does it he just grabs whatever’s nearest. The slovenly shite he threw me in this morning was so mismatched and undersized I half expected him to bundle me into a wheelbarrow and start shouting ‘penny-for-the-guy’ at passers-by.

WEDNESDAY
Got kicked in the face by some bellwhiff on the slide queue. Top lip was caked in black mud. Daddy asked if I was doing Movember. Fuming.

THURSDAY
If it takes 10,000 hours of training to become an expert, today I became a virtuoso at clothing avoidance.

FRIDAY
You know what I love doing? Speaking at normal volume across the opposite side of a busy soft play from Mummy and then getting annoyed that she can’t hear me.

SATURDAY
Finally went on the Gruffalo trail! Was giddy with excitement as we arrived at the deep, dark wood and I’m singing the song and we start walking and even though we don’t see anything for a while, that’s fine because it helps establish the necessary tension for a big reveal later on so we keep on walking and I get a bit tired but I’m still smiling because I badly want to meet the Gruffalo and his mates so we keep on walking up hills and through mud, laugh at another family who are singing about being on a bear hunt (wrong book, douchebags) and keep on walking and I’m wondering why we still haven’t seen fuck all, not even one of the peripheral characters to keep me interested, and then I think I spot him but Daddy explains that’s just an old man having a piss so I get a bit upset and Daddy keeps saying he can see him on the horizon but it’s all lies so we keep walking and I’m about to give up and run into a bush and then WE SEE HIM! So we start running and I fall over into a puddle so I’m crying and soaking wet but Daddy shouts that we’re nearly there so I jump up and we’re running again till we get right up close and see this absolute joke of a Gruffalo that looks more like Brian Blessed so I give him the finger and shit my pants in protest.

SUNDAY
Sang a rousing rendition of happy birthday to Mummy. Her birthday’s in September but that’s not the point, is it?

🤓 I’m doing a UK stand up tour this Autumn! Get tickets here.