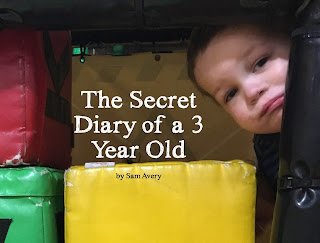 MONDAY
Cried in the night so ended up in the Big People’s bed. It was fun – I clawed at both their faces, head-butted Mummy and kicked Daddy in the tezzers so many times they changed shape. We were all having a great time together so to say I was disappointed when they put me back in my own bed is a massive understatement.
TUESDAY
Did a sit-down wee on the toilet. Everyone cheered. Felt like Rocky. The pulsating atmosphere in the bathroom inspired me to then push out a Herculean bum nugget as a little encore for the fans but unfortunately, despite my facial gymnastics clearly indicating I was now pressing out a chunky dog log, Daddy must have assumed I was instead trying to solve calculus or maybe complete a formidable algebra equation because the oval-bollocked fuckwitt lifted me off the bog mid-turd. He’ll never wear those slippers again and it’s all his own fault.
WEDNESDAY
Listen, Mummy - if I say I don’t like something, please accept that. Just because I liked it yesterday and may like it again tomorrow doesn’t mean I am obliged to like it today. People’s tastes change. You used to like Daddy, for instance.
*SIGN UP FOR MY FREE MAILING LIST TO RECEIVE EXCLUSIVE BLOGS & FIRST DIBS ON STAND UP DATES - CLICK HERE*
THURSDAY
I’m sick of everyone assuming that just because someone is a similar age to me that we’ll instantly be bezzie mates. Sometimes we have literally nothing in common. What are we supposed to bond over? The fact we can’t control our bowel movements? Maybe we’ll hit it off with a thrilling conversation about which brand of nappies we’re sporting this season or better still, exchange dietary tips? Do me a favour.
FRIDAY
The Big People really fuck me off when they sing Wheels on the Bus in the wrong order you know. It’s a kids song, not Pulp Fiction – you can’t just mess with the narrative and expect it to still be entertaining.
SATURDAY
I think I’ve grown into a very generous person. I just love sharing stuff with other people. As long as I get it back straight away, I’ll share with absolutely anyone. Also, everyone else needs to share whatever they have with me at all times, otherwise I get very angry. And I’m not giving that stuff back. No chance. Never. Don’t even ask. I won’t.
SUNDAY
Big People keep telling me to be careful all the time. ‘Be careful near that table!’ ‘Be careful with that spoon!’ I’M A TODDLER. I am being careful. It just so happens that I don’t give a flying fuck.
LIVE UK TOUR DATES 2018/19
SOUTHPORT: https://www.skiddle.com/…/Sam-Avery-Learner-Parent/13182280/
LONDON: https://leicestersquaretheatre.ticketsolve.com/sh…/873585479
SALFORD: https://www.thelowry.com/events/sam-avery-the-learner-parent
**MORE TO BE ANNOUNCED...JOIN MY MAILING LIST FOR FIRST ACCESS ON TICKETS**
GET MY BOOK 'CONFESSIONS OF A LEARNER PARENT': bit.ly/learnerparent