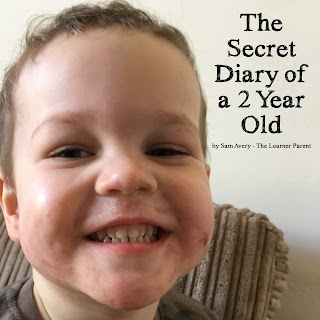 MONDAY
Did an Easter egg hunt. Picked up a dog turd. I prefer Christmas.

TUESDAY
Saw some 6 year old rocking a dummy. What a legend.

WEDNESDAY
Went to the park. Was excited to go on the big slide till I got to the top and saw how nervous Daddy was so became suddenly nervous myself. Sat at the top for ages regretting my life choices and when I finally plucked up the courage to move I got stuck halfway down in my stupid ‘slow’ pants. Started crying while bum-shuffling slowly down the slide like the last bit of ketchup in the jar so tried to stand up but Daddy freaked out shouting ‘HOLD ON, SON!’ while trying to run up the slide but slipping on his face like a total bellend. After getting laughed at by the entire park (and some passing motorists) he gave up and ran round to sprint up the steps but just ended up joining a queue of impatient toddlers waiting for their go on the slide. He tried to go back down but by now a load of other kids had joined the queue so he was boxed in like Gulliver in the middle of a Lilliputian conga. By the time he got to the top I’d already slid down, ran off and twatted my head on the roundabout.

THURSDAY
Overheard The Big People discussing my birthday presents WHILE I WAS IN THE BASTARD ROOM. Way to build suspense, guys. Apparently they’ve got me a ‘wotsit’ and a couple of ‘you know whats’ which sound absolutely bollocks if you ask me.

FRIDAY
Went to the soft play but it was closed so it seemed only fair to open the gates of Hell in the middle of the car park. Mummy calmly explained it would open in just ten short minutes so I ran away from her and cried into a bin. In my defence, I don’t really understand the concept of time yet. I don’t even understand sandwiches if I’m being honest.

SATURDAY
That baby gate has got to go. The lack of trust it represents towards me is a total disgrace when you think of all that I contribute to this family.