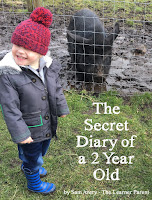 TUESDAY
Nork-chopped Mummy during a mild banter session that got out of hand. She raised her voice and told me I shouldn’t hit. I calmly explained that I really enjoyed hitting her and that life was for living. She said I shouldn’t hit anyone, even if I did enjoy it, again with a slightly louder voice than was really necessary for the occasion. I reasonably argued that it was quite the jape to slap your mother across the bazongas when she was least expecting it and that anyone who disagreed must be dead inside. She disagreed.

WEDNESDAY
Couldn’t find my mask. Lost my shit. Looked everywhere. Daddy pointed out it was on my head. Didn’t even get embarrassed. Just pulled it down and cracked on. I love Sainsburys.

THURSDAY
Was put on the naughty step for repeatedly tit-walloping (Daddy this time - bigger target) so ingeniously moved myself up to the second step, which technically isn’t the naughty step, and thus avoided my punishment. Fuck the police.

FRIDAY
Worked out if I pretend to be really shit at something The Bastards keep doing it for me. Made a note to use this tactic for the next two decades.

SUNDAY
Went to a kids birthday party. Had a jam sandwich. Blew my mind. Could feel the doors of perception swing open to reveal a hidden level of consciousness and a realisation that all life is energy, joy is eternal and we are all one being connected through love. Plus it was on white bread which is fucking lovely innit?

JOIN MY MAILING LIST FOR A FREE & EXCLUSIVE BLOG EACH & EVERY MONTH: bit.ly/learnerparentnewsletter   I PROMISE NOT TO SPAM YOU!