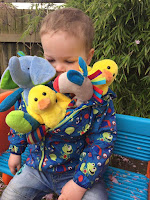 MONDAY
Kicked off big style after bathtime so they sat me on the naughty step. Had no pants on so made a political statement by emptying my arse all over it. #fuckthepolice
TUESDAY
It’s simply not enough that I have all the toys I want. Other people must also have toys. Not necessarily the toys they actually want but the toys that I want them to have. And this can change dramatically at any moment for absolutely no reason so keep the fuck up, bozos.
WEDNESDAY
I wish everyone would stop telling me I can’t do stuff. It does my little tits in.
THURSDAY
Back on the naughty step today. I really don’t understand how the good old fashioned bottom step is now suddenly the naughty step? It’s a joke really as it’s the very same step that Daddy sits on to tie his shoelaces and he never screams, sobs and then reluctantly apologises before he gets up like I have to.
FRIDAY
Some little girl at the park had thrown her hat on the floor and her Mummy was telling her to pick it up but she wouldn’t pick it up so I walked towards them and also told her to pick it up while pointing my finger quite aggressively at nobody in particular, hoping that an extra voice would help resolve the situation. Daddy said it was rude for me to do that and then he started waffling a load of old shite about people in glass houses not throwing stones or something but I got bored so picked up an actual stone and tried to throw it at a dog and Daddy got annoyed again, even though we were nowhere near a frigging glass house. Once again, mixed messages from the Big People.
SATURDAY
Had meatballs for lunch and they were bloody delicious. Kind of wish I hadn’t spent the last 18 months throwing them at the wall every time now.
SUNDAY
Woke up super early as Daddy hadn’t shut the curtains properly so he took me downstairs and we watched telly for proper ages. Finished Season 4 of Bing (not as good as Season 3 IMHO – talk properly you animated arsehole!) and watched some old-skool, bootleg Mr Tumble on YouTube. Great morning. Think I’ll wake up early every single day from now on if that’s what happens.
GET MY BOOK HERE.
Posted by Sam Avery at 08:24