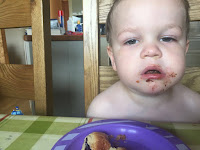 MONDAY
Got upset at something insignificant so Daddy tried to calm me down by explaining everything simply and calmly, using logic, patience and love. I couldn’t give a fuck, mate. Just give me the biscuit.

TUESDAY
Saw a girl on a scooter today. I’d love a scooter. Something else to fall off innit?

WEDNESDAY
Screamed my head off in the living room and Daddy sprinted in looking really panicked and he must have thought I was injured in some horrific manner because he almost seemed relieved when he realised that I hadn’t in fact broken a limb or got my finger mangled but instead was struggling to fix the bottom of my jeans that needed rolling up a bit.

THURSDAY
Mummy was taking us to see an old friend today who I’ve never met and she was dead excited. She asked me if I was going to be shy again and I said no because I was only shy last time I met her friends due to the fact I’d shat my pants and despite my tender years, I’m not sure that’s a great first impression for people to have of you is it? Then she asked if I was going to be good and I said I would but thankfully didn’t sign anything legally binding because when we got to Starbucks I thought it would be much more fun to act like a miniature Beelzebastard and start biting furniture and rolling on the floor. What cheered me right up was when Mummy said to her friend, ‘Sorry, he’s not NORMALLY like this.’ Ha! Hilarious.

FRIDAY
Finally managed to jump in the air today. Such a buzz! Hadn’t prepared for the landing though so fell on my arse. Good job my nappy was chock-full of piss and acted as an emergency cushion.

SATURDAY
Was playing hide and seek with Mummy and she started counting to 20 and I went to hide but noticed the baby gate was open so I was straight up the stairs to hide in the bath but she must have heard me giggling while I climbed the stairs as she only got to 7 and then came and got me. For God’s sake woman, rules are rules!

SUNDAY
Refused to eat my chicken so they said I couldn’t have a yoghurt. I stood firm on my chicken stance but they weren’t budging on the yoghurt so in the end I agreed to give it another go. They brought it back and I’d forgotten how much I didn’t want it so when I spotted the chicken in front of me again I totally lost it so they took it away a second time. I then quite optimistically asked for my yoghurt again but they explained that I had to eat the chicken first so I reluctantly asked for it to be brought back again. (My negotiating skills are still developing but I’m sure I’ll have this nailed before Christmas.) I sucked the flavour off a few bits and spat them out onto the floor only to be told that this didn’t actually constitute eating and therefore I wasn’t eligible for a yoghurt. For fucks sake. I haven’t been this angry since they turned the telly off. They took me out of my chair and I tried to run away but slipped on a rogue piece of chewed up chicken that some selfish bastard had spat on the floor so I ended up face down on the floor in a heap of tears, desperation and gravy. I normally love chicken.