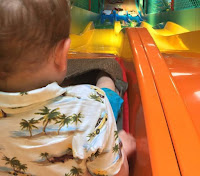 MONDAY
Went to a new playgroup and an impromptu farting competition broke out. In hindsight I should have conceded defeat after the little girl I was facing let rip with a stonker that sounded like when Daddy broke the hoover but I didn’t and I tried so hard to compete because I wanted to impress everyone and in the end I think I tried a bit too hard to impress and accidentally shat myself. I’m not sure that was the impression I wanted to make but I’m sure I’ll get over it.

TUESDAY
Just because I run away screaming into another room and start doing a jigsaw doesn’t mean I want you to stop reading that book to me from the other side of the house. When are people going to realise that I can multitask?

WEDNESDAY
Didn’t want my nappy changing first thing so kicked my legs furiously and bent my body in ways I didn’t think was possible just to make it really bloody difficult for Mummy. As she was trying to put the new nappy on I managed a full scale commando roll but due to lack of planning and no proper training I didn’t see that my old nappy was left wide open right next to me so my roll to freedom was hastily curtailed when I ended up face down in an entire night’s worth of sweat and piss. I was in a world of despair down there but I’m sure I could hear the Big People giggling. What utter bastards.

THURSDAY
I want to be the first child to appear on that middle bit of Tellytubbies and not repeat myself like all the other stupid kids. Don’t say the same thing twice - you’re on national television!

FRIDAY
During naptime I decided to be a train for two hours instead. I was choo-chooing all over the place and I reckon I’d make a great train although it must be quite tiring as I was fucking exhausted later on.

SATURDAY
Why is my pain tolerance so low if I’m clumsy as shit? Walked into two walls today and then stood up at speed whilst under a table and twatted my head. There’s simply no justice.

SUNDAY
Managed to shove my hand down my nappy when I woke up and pulled out part of the massive jobby that had annoyingly woke me up on it’s way out. It absolutely reeked so I tried to shove it back into the nappy but most of it ended up smeared across my back so I gave up and wiped the rest all over my cot, bedsheets and teddy bears instead. I feel bad about that last bit, especially Tigger. He’s always been there for me and in return I completely submerged him in so much bum fudge that he looked like something Daddy was watching on the news once about an oil spillage.