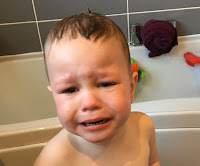 MONDAY
Why does Mummy sit down? She must know by now that it’s utterly futile – wherever she is I’ll find her and force her to get up again. I always ask nicely at first but if she’s not on her feet within a tenth of a second of my first request then I think it’s only fair to start shouting at her with increasing volume and indignation. She must stand up, always. Be ready, woman. I may not need you right this instant but if you’re sitting down you’re literally no good to anybody.

TUESDAY
Two things I cannot and will not abide:

Both make me sick to the core. Thankfully, the Big People don’t hide mashed bits of injustice in my yoghurt so I eat it without knowing.

WEDNESDAY
Threw a tantrum after dinner that got quite silly. Was swinging on the curtain having a lovely time and not hurting anyone but Daddy said I might hurt the curtain so I grabbed the other curtain and it turns out the same rule applied to that one, which I think perhaps he should have made clear at the outset. This total and utter bullshit incensed me fucking rotten so I screamed and yanked my socks off, although the right one took longer to get off and I was pulling it so hard that when it did finally come off I hit myself in the face which didn’t help anyone to be honest. Daddy tried to pick me up so I loosened my body to make it physically impossible (I’m sure I’m part-worm) and I crawled under the table and sat there for a bit, crying at regular intervals so they knew I wasn’t ready to begin peace talks. Whilst rolling about amongst the food I’d thrown on the floor I came across some old toast so started chewing it and then I saw Mummy’s legs appear in front of me so started crying again but I was eating toast so the crying sounded disingenuous to say the least and when she bent down to see me we both smiled and then had a little cuddle.

THURSDAY
They asked me what was wrong but I couldn’t explain, mainly due to the fact that:
a) I can’t talk properly yet.
b) I didn’t have a fucking clue.

FRIDAY
Got an ice cream at the park - total heaven! It was all over my face which made it even more fun and I was licking harder as it was starting to melt and the combination of me licking too much and gravity being a total bastard made it drop onto the floor and before I could pick it up some scruffy dog ran over and started licking it instead. It’s hard to put into words the total and utter inferno of misery that ravaged through me for the next forty minutes but I have never felt so broken and empty as I did today. Well, until Mummy bought me a new one and everything was sound again. Lovely day, actually.

SATURDAY
Been trying to jump in the air all week. Can’t seem to manage it. The Big People are very encouraging but I’m not sure I like learning under so much scrutiny. I’m also aware that if I do manage it, I don’t know how to land yet so will probably just end up on my arse or face but I’ll cross that bridge when I get there.

SUNDAY
Woke up and started shouting ‘NO!’ before I’d even got out of my cot – a new record. To be honest, that set quite a negative tone for the day and in the end I barked ‘NO!’ at pretty much every suggestion, regardless of whether it was incredibly productive or total bollocks. Daddy lost his patience a little and asked if I’d like to go to bed early so I shouted ‘YES!’ and you should have seen his face! You weren’t expecting that, were you old man? Take that, fuckers!

(I post a new 'Secret Diary' to my FB page every Tuesday...I'm a stand up comic, dad to toddler twins and parent blogger...you can also find me on Instagram @thelearnerparent )