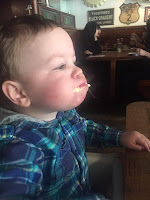 MONDAY
Started saying ‘NO!’ to everything. It’s exhilarating! When I think back to all those times I just went along with their helpful and loving suggestions – well, not anymore. I usually won’t even let them finish the question although sometimes it’s not even a question but I answer it anyway with a prompt and enraged ‘NO!’ and sometimes I wave my arms or do a little angry dance. Got offered a biscuit today and shouted ‘NO!’ even though I really meant yes because I love biscuits but I’ve discovered that being unreasonably obstructive is so enjoyable that it’s even more fun than actually eating biscuits which is maybe a diet technique that Daddy might want to try sometime soon.

TUESDAY
Daddy did a funny face and it was really funny and I laughed and he did it again and I laughed even more and then he did it a third time and not only did it instantly stop being funny, it immediately became offensive towards everything I stand for. I stopped laughing and shouted at him and he stopped. He sheepishly tried the same face later on but I stared at him and he quickly backed down.

WEDNESDAY
I wish they’d stop wiping my nose. My mouth does a fine job of catching any stray snot that’s running down my face and anything that doesn’t drip down is taken care of by my tongue or sleeve. I’m not crying because it hurts, you morons - you’re stunting my independence!

FRIDAY
Didn’t eat any of my dinner so Mummy said I couldn’t have a yoghurt. In the confusion I only heard the word ‘yoghurt’ so understandably assumed I was getting said yoghurt. When she didn’t give me a yoghurt I did one of those cries where you feel like you’re going to choke on your own face so Mummy picked me up and I flung my head back into the wall. Hurt like fuck. Still no yoghurt. Waste of effort.

SATURDAY
Discovered a new game! It’s called ‘Keep-throwing-your-dummy-out-of-the-cot-so-that-the-big-people-keep-coming-upstairs-to-pick-it-up.’ The title needs work but you get the idea. Best part is watching their enthusiasm and mood deteriorate with every trip they make. Reckon this game could go global one day.

SUNDAY
Teddy bear’s picnic today. Had a lovely time mingling and pretending to drink tea and then a load of these old Care Bears that belonged to Mummy when she was little rocked up and started nicking all the tea and basically ruined everything. One of them was a talker but really low on batteries so when he spoke he sounded like the guy who lives on our street who Mummy says drinks too much and it was fucking terrifying.

(I post a new 'Secret Diary' to my FB page every Tuesday...I'm a stand up comic, dad to toddler twins and parent blogger...you can also find me on Instagram)