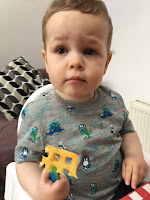 MONDAY
Had the runs today. Arse was out of control. Every fart felt like Russian Roulette. At the dinner table I pushed out something that felt like soup so Daddy took my pants off and I sharted down his arm. He looked like Mummy when she tried that cheap spray tan.

TUESDAY
Started to feel sick at lunch so made sure I ate loads more food than usual and asked for seconds and drank extra juice. Was tucking into my third waffle when I did a weird cough which morphed into a puke which went on forever and definitely lasted longer than some of my naps. Tried to polish off the waffle in between bouts of retching but the bastards took it off me and then I puked all over my plate and they took that away even though I clearly hadn’t finished and I tried to tell them but they said eating your own sick is bad for you which is rubbish as I’ve seen the dog do it and he’s always wagging his tail.

WEDNESDAY
Woke up feeling brilliant. Stood up in cot, giggling my head off. Tripped over duvet. Twatted head on side of cot. Started crying. Mummy came in so I jumped up again, feeling better. With all the excitement and emotion I fell back and twatted my head a second time on the headboard. Started screaming. Godawful start to the day. The world can be a cruel place sometimes.

THURSDAY
Some of the banter in this house stinks worse than the nappy bin. Got asked today, ‘Are you eating a banana?’ Well Daddy, let’s review the evidence shall we? You’ve just given me a banana, and I’ve taken a bite out of said banana. So in summary, yes – I’m eating a fucking banana. How on earth you convinced Mummy to shack up with you with such woeful patter is frankly beyond me.

FRIDAY
Been experimenting with walking on my tip toes. It feels good. In fact, scratch that – it feels GREAT. Why doesn’t everyone do it? Plus now I can reach all the dangerous stuff they thought was out of reach, like wine and scissors.

SATURDAY
Slept in today till 5.20am. Felt quite lazy but sometimes you just need a bit of ‘me’ time to recharge the batteries.

SUNDAY
Did a poo today that was so difficult I’m pretty sure it came out sideways. Turned my face away from everyone so they wouldn’t know it was me but it proper stank so I denied it for ages and left the room for a bit to lie low and let the heat die down. Managed to evade the authorities for ages but then got stuck between the sofa and the bookcase so had to shout and wait for help to arrive and by then it had started climbing up my back so I kept denying it but then it started to leak so I blamed it on Mummy.

(I've been posting all the time on my FB page but have neglected to upload them to my website - apologies! And you can expect a flurry of blogs over the next week, Sam x)