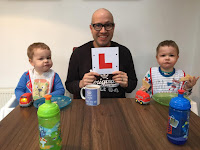 I set up my social media pages years ago, waaaay before my kids were even a glint in my eye.

They were set up initally to post stuff about what gigs I was doing, links to Edinburgh Festival dates and short video clips of my stand up. As a jobbing comic, I thought it would be useful for promoters I didn’t currently work for to see what I was up to and if I was any good, it might lead to more work.

I barely posted anything.

Then my kids were born and I started the blog. At first I just posted that on my personal Facebook profile but a few months in I wondered if some people on my friends list were maybe getting a bit sick of scrolling through two solid months of posts about not-so-solid nappies.

That’s when I started posting my blog on my other accounts and in a quite startling development, the audience started to grow, especially on Facebook where there are now over 61k likes on the page.

Fast forward to now and I’ve posted nothing but my blog on social media for AT LEAST eighteen months, leaving any would-be stand up promoters to probably feel slightly confused when they land on my accounts to see what gigs I’m currently doing and instead find a long post about tantrums in Tesco.

So with that in mind, I’ve decided to rename my social media pages.

A recurring theme in my blog is my lack of understanding of what I’m doing (or ‘fuckwittery’ if you will) and my quest to learn. This has been something I’ve tried to cover most weeks in my ‘Things I Learned as a Parent’ posts.

So I’ve renamed my pages as…

I think it's the perfect fit for my blog and the pages - I’ve been a parent for two years now and I’m still totally winging it. I've spoke to much more experienced parents who say they're still learning all the time as every phase throws up brand new challenges. I can’t ever forsee a time when I’m not a Learner Parent, whether I’m helping my kids move out or welcoming my first grandchild into the world.

Hope this all makes sense - thanks for reading this and all the other nonsense I post. It’s so heartening to know so many other people have similar struggles as myself and it’s great to share in the highs, lows, joys and frustration that this incredible thing gives us on a daily basis.
Sam (AKA The Learner Parent) x

p.s. If you want to find me on other social media I’m on Instagram, Twitter and Facebook. I’m not on Snapchat as that place just looks bloody mental.

p.p.s. I nearly signed this off as ‘The Artist Formerly Known as Sam Avery Comedian’ but then realized how utterly wanky that sounds. And now I’ve written it here anyway. Should have just kept that bit to myself probably…

Benny said…
During the last couple of rolex replica sale offers skilled amazing achievement, going for a bigger amount associated with product sales from it's currently very aggressive section associated with fairly inexpensive rolex replica listed in between $2, 000 as well as $5, 000. Nevertheless, Tudor needs to discover methods to rolex replica sale which impetus, as well as for your, this understands it's every single child display a lot more than good-looking, heritage-inspired wrist watches. Here is exactly how rolex replica sale sophisticated within conjunction. Rolex companies the majority of just about all aspects of it's rolex replica sale such as instances, anklet bracelets, clasps, actions, as well as knobs in-house. With regard to more than 10 years right now, they've been utilizing 904L for his or her metal instances as well as anklet bracelets instead of the actual a lot more typical 316L. Finally, Rolex may be producing sluggish, however constant improvement within refining their own actions, which are rolex replica examined through these phones end up being precise in order to inside -2/+2 mere seconds daily.