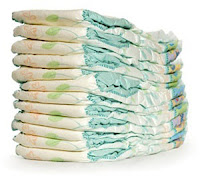 Opening your baby’s nappy is like a box of chocolates – you never know what you’re going to get and you’ll probably end up with sticky fingers. My twin boys are 10 weeks old and these are the 12 types of nappy I’ve encountered so far.

(If you’re eating your dinner I recommend reading this a bit later on.)

1.The Leak (AKA The Pooseidon Adventure)
It’s everywhere except in the nappy itself. Worse still, it’s leaving a trail. If Hansel and Gretel had a leaking baby with them the story would’ve ended happily.

This type makes me actually doubt gravity. How can something that goes down end up on their shoulder? If it wasn't so gross you'd stand up and applaud. Unfortunately you can’t even enjoy the irony of removing a sleepsuit with bum juice up the back and ‘Too Cute’ across the front.

(There are many causes of The Leak, one of which I covered in it’s full gory detail here.)

2.The Tardis (AKA The Turdis, The Doctor Poo)
This is when the amount of waste inside is more than physics will allow. Normally accompanied by a cry of ‘HOW IS THIS EVEN POSSIBLE?’ from the erstwhile changer.

3.The Adidas
Three stripes of poo in perfect unison.

In the interest of corporate balance I once had some baby sick on my t-shirt that looked like the Nike swoosh.

4.The Turn A Blind Eye (AKA The Can I Leave it?)
We’ve all been there – you’ve had a tricky feed with enough puke to wallpaper the lounge. You’ve just got them down and you’re about to drop off yourself. But just before you reach the promised land of nod the silence is pierced by a sound so squelchy that you suspect a pair of ducks have broken in and started mud wrestling.

The questions go through your head.

Should I get out of bed and check the nappy?
Or should I just pretend there is nothing to check?

If you go with the latter make sure you have a decent cover story when the grisly incident is uncovered.

“Sorry luv, he was fine when I went to sleep. I must have already dropped off by the time he shat on the curtains.”

5.The Phantom (AKA The X Factor - all hype, zero content)
You've heard plenty of bottom chatter but you open the nappy and it’s emptier than an MP’s promise.  Has it gone back up from whence it came? Was it (for want of a better word) a poomerang? It’s a fecal mystery. The depressing reality is that you may be about to witness the sheer terror of the next type of nappy below.

6.The Live Poo
This is when the whole (and indeed, hole) incident plays out in front of you like an advert for one of those Play Dough factories. Before my sons were born I had never seen a turd leaving it's natural habitat. Now I’ve seen it more than Eastenders.

The first time I was subjected to the abject horror of The Live Poo I was so appalled at what my eyes were seeing I yelped like a dog with its tail caught in a car door. As I shrieked in disgust I jerked my head back, like I'd been shown a truly obnoxious yet very impressive magic trick.

The last time I dealt with a Live Poo the new nappy filled up almost instantly too, as my son continued to download the brownload at high speed. So I ended up recreating the famous scene from Indiana Jones (with my second new nappy) where he quickly replaces the precious stone with his bag of rubble, just to stop the bum nuggets scattering across the carpet.

At times this one can feel like your child is giving a less-than-stellar review of your parenting.

7.The Encore
It’s finished. It’s over. You’ve dealt with it. You’re moving on. Except it’s suddenly started again and you’re back to square one. Like a low budget horror movie villain, this one takes some licking (if you’ll pardon the expression).

8.The Katie Hopkins
One that is completely full of shit.

9.The Colonel Mustard
Named after the infamous Cluedo character, even though it’s very obvious whodunnit. The smell is troubling, as is the colour – never mind the Bristol Stool Scale, you’ll need the Dulux Colour Chart to figure out what’s going on with this one.

10.The Deal or No Deal
When you open the nappy to find the opposite of what you were hoping for, but respond by saying ‘It’s alright, it’s alright.’ Even though it’s definitely not alright.

12.The Poonami (aka The Turdal Wave)
All of the above combined. This will ruin your clothes, your day and your spirit. It’s also guaranteed to happen in Costa.
Forget wipes, you need to bring in NATO. Keep your pets at arms-length too or they’ll be looking like those poor sea animals when there’s an oil spillage.
If you haven’t experienced one of these yet, you will. And it will leave a stain on your soul just as stubborn as the one on the sofa.

Adrianne said…
When your little one becomes a toddler, you will discover another -- poo-paint. Baby's room is suspiciously quiet in the morning, then you hear a giggle. You open the door and are assaulted by the smell, and once your eyes stop watering and you look around, you see artwork all over beds, walls, dressers and toys. Baby is covered literally head to toe in the stinky "paint" that he found in his diaper. It will haunt you forever
8 June 2015 at 19:35

Kirsty N said…
My husband and I are expecting our first baby in a matter of weeks...he has no idea what's going to hit him. Should I send him a link to give him a heads up or just make sure the camera is rolling for when he first experiences The Poonami?!
9 June 2015 at 16:38

Cindy said…
Hi Sam
My twin boys are 6weeks old and i have been up literally all night with them and even though i feel like death run over reading your blog has made the hours fly by. Thank you for the giggles, i can definitely relate
P.s. If you ever find out how to feed and wind them at the same time let me know :-)
24 June 2015 at 02:34

pinkymooo said…
You missed one.

The mother in law:

The poo that just turns up without prior warning. You didn't hear or smell it. You don't realise it's arrived until you open the nappy a while later and discover it. Good luck getting rid of that sucker!
22 September 2015 at 11:27

marta said…
There are a few diverse sorts of skin inflammation and pin-indicating the kind of dermatitis you have can help in the route in which you oversee and treat the condition. Skin inflammation (otherwise called dermatitis) is the name for a gathering of infections that are the aftereffect of aggravation of the skin.
7 May 2016 at 10:51

hoxn123 said…
that of steel, handbag replica but scratch the surface so that it can also withstand a violent crash, to ensure lasting as new. Watches Replica , perfect inherit and continue the essence of the series came in 1957, in order to Designer handbags enhance the light and comfortable to wear watches, case outline is designed to be relatively slim. UK Replica watches Die fluted rubber readability unidirectional rotating bezel is better, except when Replica Rolex Watches decorated with.
2 December 2016 at 09:42